The earliest recorded mention of the Parish Church of St Ives is in the Domesday Book, AD 1086, when it is stated that there was here a “priest and a church”. An old manuscript has the following note: “970 AD in the twelfth year of Edgar, surnamed Peaceful, Adnothus, Abbot of Ramsey, built St Ives Church, and dedicated to All Saints.” This original church would be small and probably of wood.

About 1470 an entire rebuilding took place. The north chapel, the nave with its arcade and clerestory, the porches, and the side aisles were rebuilt; the chancel walls were raised to their present height and new windows inserted; and the tower with its spire was probably newly added to the church and the aisles extended to its western face. The church, therefore, now presents itself as chiefly of fifteenth-century date. 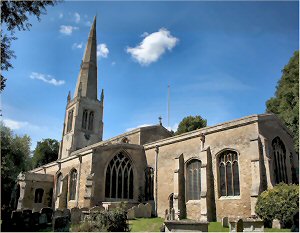 The church is finely placed on the north bank of the Ouse. The visitor approaching the church from the Waits will be struck by the extremely graceful tower and spire: the height, 151 feet, is not great but the excellent proportions are apt to make it seem more. Passing down the south side the Porch should be noted. It has two vaulted niches for figures and the side walls have each a window of two lights.

The Tower is of three stages. The west door has fragments of old work: the careful observer may find, on one side the head, on the other the tail end of a rabbit; this is probably a play on the name, Coney, which was fairly frequent in these parts. Flanking the doorway are large niches with moulded pedestals and shafted jambs; modern figures of St Peter and St Paul have been placed in these; the niche over the door with the figure of St Ivo is modern.

The bellchamber has in each wall a pair of coupled windows, each of two lights, the pair having a common square outer head with cusped spandrels and a moulded label. The spire has suffered many vicissitudes; it was blown down by the great gale of 1741 and rebuilt in 1748; it was again rebuilt in 1879. Finally in 1918 a large part was knocked down onto the church roof when an aeroplane crashed into it. The rebuilding was completed in 1924. The north porch has been very much restored and there is very little of the original work remaining.

Entering by the north porch the general effect is one of great richness due to much ornamental work added in the last fifty years.

The Nave is of four bays with two-centred arches of two moulded orders, the outer continuous and the inner resting on attached shafts with moulded capitals and bases. The clerestory has on each side five windows, each of two cinquefoiled lights in a four-centred head. The open timbered roof is modern, having replaced a plastered ceiling after the disaster of 1918.

The figures on the pillars immediately attract attention; these were replaced in 1897, but the carved stone brackets on which they stand are original of 1470. There are ten of these in pairs, two pairs on the north and three pairs on the south side. The subjects are: (a) a lion’s face; (b) a dog biting its own tail; (c) a ram; (d) a bull baited by a dog; (e) to (h) foliage; (i) an eagle; (j) an angel holding a scroll; beneath the eagle corbel is a smaller carved and moulded bracket. The figures standing on these represent the following Saints: St Nicholas and St Margaret; St Mary Magdalen and St Laurence; St Stephen and St Andrew; St George and St Agnes; St Thomas of Canterbury and St John Baptist. These are all the work of Ninian Comper. 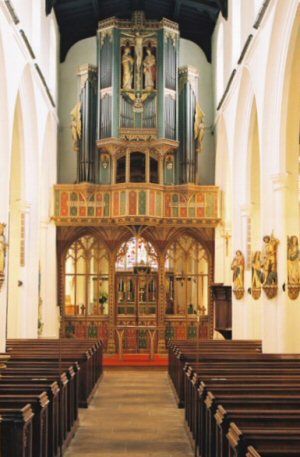 The screen with its organ case and rood is also the work of Sir J.N. Comper, and was the gift of the Revd. A.S. Barnes (vicar, 1891-4) and some friends in memory of his father George Carnac Barnes, C.B. The cost of the painting was borne by the Revd. Salisbury Price, who was vicar from 1894 to 1899. It was found in practice that this position of the organ was extremely bad owing to the impossibility of maintaining touch between the organist and the choir in the chancel. Later on in 1926 the organ was rebuilt and enlarged and replaced in the old north chapel, but the facing pipes of the old one were left in position as their removal would have spoilt the whole composition.

The Pulpit is a good example of the late sixteenth or early seventeenth century. It is octagonal, of oak, the sides panelled in two heights with moulded styles and rails, the lower panels with enriched arches and side-pilasters, the upper panels with strap-work ornament: the bookboard is continuous and is supported by carved and scrolled brackets. The trumpet stem with moulded rib and moulded capital to post is probably earlier in date.

The Font has an octagonal bowl with a continuous range of interlacing arcading resting on attached shafts with moulded capitals and bases; the date is early thirteenth century.

The Chancel has an east window of five cinquefoiled lights with vertical tracery in a four-centred head; the other windows are of similar character, but of three lights. In the north wall is an arch of the thirteenth century opening into the north chapel. Further east is a doorway which opened into a vestry, now destroyed; the door is original of nail-studded battens; the extent of the vestry is indicated by the middle buttresses on the north wall and between them the outer face is recessed, the upper part of the wall being carried by a stone and tile arch.

The south door is fifteenth century work, partly restored. The roof was well restored in 1948. The reredos was the gift of the Revd O.W. Wilde — vicar from 1899 to 1931; it represents the crowned figure of our Lord with St Edward the Confessor, St Wilfred of York, St Augustine of Canterbury, and St Oswald, King and Martyr. The wrought-iron chandeliers are the work of Aymer Vallance.

The North Chapel and Aisle are continuous. There is an upper doorway with ogee head which led to the original rood-screen; this was probably approached by a wooden stair. Some people think that the shallow recess in the south wall was originally the entrance to the stair to the rood, but practically this seems to be impossible owing to the shallowness of the wall here.

The reredos, also the gift of the Revd O.W. Wilde, is surmounted by a statue of our blessed Lady with the Holy Child. The four windows are of three lights with vertical tracery. At the west end is the Memorial Chapel to seventy-seven men of St Ives who gave their lives in the war of 1914-18. The northwest respond of the nave arcade incorporates a twelfth century respond of the original stone church; the lower springers of the arch and part of the capital with a chamfered abacus are visible.

The Tower is two-centred and of two moulded orders, the outer continuous and the inner springing from attached shafts with moulded capitals and bases. The north and south arches are similar to the east arch but spring from the same level as the nave arcades, except the outer order on the inside, which is carried up to the same height as the east arch.

The ground-stage of the tower has a stone vault with a moulded ridge, intermediate and wall-ribs and a round bell-way in the middle; the bosses are carved with foliage, two shields with emblem of the Passion and a pelican “in her piety”. The original stairway in the south east pier has been filled up to give greater strength, and access to the bell-chamber is by the circular iron stairway at the end of the north aisle.

The South Aisle has windows of similar character to those of the north, except that in the east wall; this is an early fourteenth century window of five pointed lights with intersecting tracery and a single quatrefoil. Flanking the window are two niches, one with chamfered jambs, trefoiled head, moulded label and mask-stops; the other similar but with an ogee head and label.

In the south wall there is a very fine double piscina with moulded two-centred arches springing from detached shafts with moulded capitals and bases, the capital of the middle shaft carved also with foliage. The common outer order with round head is carved with “dog-tooth” ornament. There are two octofoiled drains. This is of the early thirteenth century. To the east of this there is an aumbry recess. The Altar in this aisle was restored in memory of a former Churchwarden, Mr Harold Turner, by his wife. It is in honour of the Sacred Heart of our Lord and was designed by Sebastian Comper.

There are a very few fragments of mediaeval glass in the north windows of the chancel and in the north east window of the north aisle. Most of the stained glass is not good, but there are two windows by Sir J.N. Comper; one in the north aisle to the memory of the Watts family and representing Our Lord with St Alban and St Thomas More, the other in the south aisle to the memory of Dr W.R. Grove with figures of St Gregory, St William, and St Richard. The Brittin window in the Chancel is by Kemp and shows St Mary Magdalen at the tomb and the disciples at Emmaus.

The church possesses a fine Italian Processional Crucifix of silver dating from about 1500. It is ornamented in relief and has the symbols of the evangelists at the ends of the arms, the Agnus Dei at the back, and Satan overthrown at the foot of the Crucified. The Revd Peter Hawkins, Vicar from 1747 to 1759, gave a large silver paten and two large silver flagons for the use of the church; the two latter are now on loan at the Fitzwilliam Museum in Cambridge.

The chief item of interest in the church records is an old vestry book which contains the signature of Oliver Cromwell as one of the overseers of the parish. There were two of these signatures but one of them has been cut out; the remaining one dates form 1634.